I’ve written before about difficulties in reading the handwriting on old documents. I had another example again today when trying to read a street name. This was for someone who had moved from Unst, Shetland to South Shields, County Durham, so it was in an area I don’t know well. The street name looked like “Orange Street” but I could have also believed it to say “Osange Street” so, since I didn’t know the area, and one should get to know the area you are working in, I decided to look it up.

Searching on Google Maps I could find no sign of either name. I recalled a previous time when I had been searching for a street and it turned out to no longer be there. So I thought it likely that the same had occurred with Orange Street.

Normally I’m used to looking at old Scottish Maps, but now I needed the same facility for English Maps. I found such a facility at Old Maps.co.uk.

In these old maps, I found that, sure enough, Orange Street and it’s neighbour Raglan Street that I had found by paging forward in the census both no longer existed. I found nearby streets Frederick Street, Green Street and Brunswick Street, all coming off Laygate to allow me to line up the old and new maps together to see where the old streets previously were.

Area in South Shields where Orange Street used to be.

Orange Street and it’s neighbours were redeveloped in the 1950s. I found a book South Shields in the 1950s: Ten Years that Changed a Town which says this:

.. the St Marks’s redevelopment scheme, at Laygate. On 3 July 1950 a notice had been placed in the South Shields Gazette giving notice, that the council of the Borough of South Shields … had made an order .. to compulsorily purchase the land and dwelling houses. Part one of the clearance area meant the demolition of Dixon Street, Raglan Street, Orange Street, Hardwick Street, Bedford Street – and part of Maxwell Street.

There is a little stub of a road coming off what is now Bedford Avenue which appears to be the remnants of where Orange Street once was. If you look at in on Street View it’s a parking area leading to some garages.

The Southtyneside images website has this photo of Orange Street (and the corner of Princes Street). 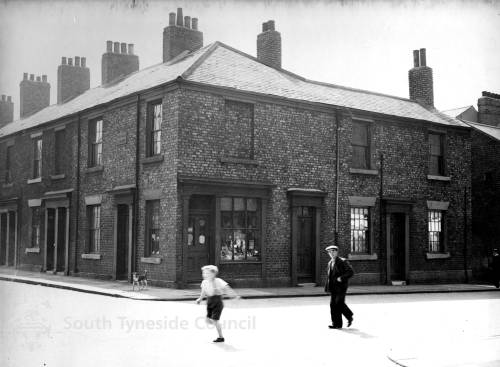 When initially searching for Orange Street, I found various people asking for its location, so I will post links to this blog post as answers to their questions.

Morag would love to hear what you think. Leave a comment here. Cancel reply

This site uses Akismet to reduce spam. Learn how your comment data is processed.